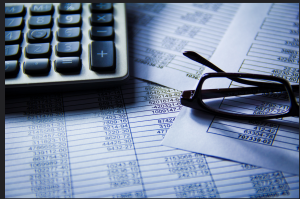 In this world of go-big or go-home startups, it seems trendy to focus on the product, focus on the user and focus on the long-term platform you are building.  All of that is super-important.  Interestingly, there is very little conversation on the financial plan.  In the old days, the financial plan was the heart of the business plan that you raised capital on.  In the days when Silicon Valley actually had a bunch of startups working on “silicon,” costs mattered. It wasn’t as simple as spinning up a couple of Amazon EC2 instances and hiring a few developers to get started.  As capital has become more available, startups’ costs have plummeted, and the potential outcomes have become even larger, the question is, “why should any early-stage entrepreneur pay any attention to their financial plan?”  If the product works, money is always available.  If it doesn’t, you’re dead anyway.

It is true that as part of the seed and Series A pitch, financial plans are probably an after-thought to any savvy entrepreneur or venture investor.  You barely have any data with which to project your business, so why should anybody trust any of the numbers you have in a deck?  At board meetings in your company’s early days, reviewing progress against the financial plan when product/market fit isn’t really even there feels totally at odds with reality.  The role of the financial plan isn’t primarily about fundraising or external reporting.  It’s about helping you chart and run your business.

We had a financial plan at BloomReach pretty much at the founding of the business (when the company was just two of us).  Here’s an excerpt from our fundraising deck in February 2009: 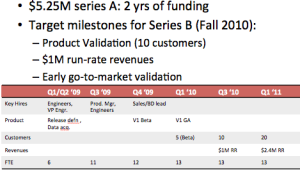 One and a half years later, we pretty much hit or exceeded all of those milestones and showed up to raise our Series B ahead of our plan.   In the fall of 2010, we raised our Series B with a clear 3-year financial plan and materially exceeded those projections by 2012.  While good products, good selling, and good execution helped a lot, our financial plan played a key role in helping drive BloomReach to achieve great things. From the day of the company’s founding, it was always something that we measured ourselves by. Goals have a way of turning into reality.  Even though we were only two people with pretty much no product and no business model and no customers, simply willing the revenue to occur by putting it down on paper, helped it occur.

Start-up financial plans can play a couple of key roles and really matter:

In most software businesses, there are only two key numbers that matter in your financial plan – revenues and cash.  Spending a ton of time thinking about the trade-offs between revenue coming in and cash going out is a worthwhile use of a sleepless night or two.  Revenues come naturally to most people in this growth-obsessed environment.  But take the cash number seriously.  Remember that cash buys freedom to fail one more time and being too aggressive about spending cash just means you’re likely to be at someone else’s mercy before you get enough “at bats.”  At every point in BloomReach’s fundraising history we have had about 80% of the cash left from the prior funding round, while seeking the next round – all of which makes fundraising a lot easier. I attribute a lot of that to thoughtful financial planning.

You can take an intense focus on the financial plan too far.  Certainly don’t let the plan be the enemy of good decisions.  Spend money outside of your budget if it will drive a meaningful return.  Choose to miss your plan if you’ll create more long-term value doing so.  Hire a lot more, or a lot fewer people if it makes sense to do so.  Remember, the financial plan is just your GPS system. Don’t hesitate to take another road if there’s an accident in front of you and  you see a shorter path to your destination.  Just be sure to adjust the GPS as you go.

Image from Numbers and Finance by Ken Teegardin licensed under CC by 2.0

One thought on “Do Financial Plans Matter in Tech Startups?”