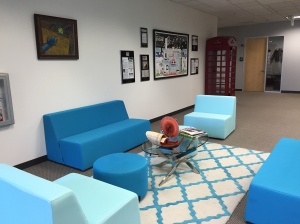 “Be yourself; everyone else is already taken.”

Shortly after I graduated from college at Princeton I went to interview at Morgan Stanley in New York City.  Outside Morgan’s Times Square building, I saw the financial firm’s big neon sign – right next to a giant stock ticker and a few flashy ads for sitcoms.  As I walked into the opulent lobby, I found myself getting progressively more uncomfortable.  It took me a really long time to get through security and as I went through it – I felt like I was dealing with a bouncer at a nightclub.  The elevators on the way up were packed. As I walked into the conference room for my interview I looked around.  There were a number of pods with exhausted-looking analysts in cheap suits surrounded by super well-groomed partners working in oak-adorned offices that had soundproof doors – everybody in his or her (rarely) own place.  The conference rooms were decorated with huge glass mementos of a financing event or an M&A event.  They call the mementos “deal tombstones,” appropriate because no one there cared about the prospects of those companies once the deals were closed.  I got the offer, I didn’t want to work there.  I reflected on why that was – it was the office space. It wasn’t who I was.  Too opulent.  Too overstated.  Too hierarchical.  Too contrived.  Too formal.

In a world of increasing virtual communications, ironically, your office space is as important as it ever was.  It represents everything about you – your values, your relationships with people, the kind of people you want to recruit and the priorities you have.  It merits careful design.  We’ve gone through five offices at BloomReach – the first in Palo Alto at the Plug & Play and the next four in downtown Mountain View, culminating with our headquarters at 82 Pioneer Way.

Our office represents who we are – it’s open, reflecting our belief in open communication; its got BloomReach branding in its colors and its lobbies; it has a technology flavor to it with the Web Relevance Engine pictorial on the wall. It has a lot of individualism, reflecting the heterogeneity of the team. Teams and executives are interspersed reflecting the “we” orientation of our culture.  We designed it with the values we believe in: We believe that everyone needs to have a stake in the culture and therefore we created teams to decorate all of the conference rooms and their unique creativity is reflected in the spirit of each one.

We have the requisite foosball tables, ping-pong tables, recreation room, the famous BloomReach painting – and we have mementos charting our young history.  We have the anniversary wall, recognizing the many people who have grown up at BloomReach. The lunch room is bright and well integrated into the rest of the office – providing a place for people to meet up for casual conversations.  The conference rooms are named consistent with our “Get Found” motto.  White boards throughout are intended to encourage our “think” value.  The global clocks represent the global nature of our business.  Basically, the layout, design and decor reflects who we are.  I can see each of our cultural values – “truth”, “we”, “think”, “own” and “no drama” reflected in the office someplace – all without explicitly planning to do so.

On a New Year’s Day two years ago, I walked into our office to see that low-height cubes had been put up.  The idea was to provide more power outlets and more private workspace.  I don’t usually veto things but I exercised my veto on that New Years Day.  Productivity matters, but I felt that energy and openness mattered more.

All great companies have iconic office environments. Facebook just feels like a “move fast and break things” place.  Morgan Stanley was likely designed with the value system that made it one of the white shoe firms on Wall Street.  Victoria Secret has beautiful models on the walls. Urban Outfitters has the cool chic vibe that you’d expect from a company based at the Philadelphia Naval Yard.

Why do office environments matter so much?  They are a scalable representation of your values. You can’t speak to every member of the team personally, but the vibe of the office that your team walks into sends a message to everyone.  I’ve had candidates appear either super excited or super nervous walking into BloomReach. The office space helps with self-selection of those candidates. It also reflects the tradeoffs you care about.  Office spaces are a pretty good indication of whether the Company you’re interviewing with or selling to is a good choice for you.  I had one sales leader tell me “we shouldn’t sell to Companies that serve coffee in styrofoam cups – they probably can’t afford our software.”  That is a pretty good qualification criteria.

The diversity of office space in Silicon Valley is telling. You have everything from the big campuses at Cisco and Oracle and Google, to the non-descript systems startups with tall cubicles, to the uber-chic urban offices in San Francisco.  Walking into those offices – you see the value system of the founders and the leaders.  Designing the identity of your office should not require more money – in fact if you’re hiring branding consultants to design it, it is by definition not who you are.  There is no wrong answer in designing it – just make it authentic.

One thought on “Your Office Space is Who You Are”